Remembering The Service Of Brave Americans 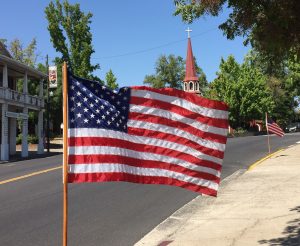 Sacramento, CA — Governor Jerry Brown released a proclamation today  that declares Saturday, November 11, 2017, as Veterans Day in the State of California. In his declaration that honored soldiers for their service, he also called on Americans to remember the plight that some face upon returning home. He states, “While the vast majority of veterans return to civilian life easily, many suffer from high rates of disability, poverty, unemployment and homelessness. We cannot glibly claim to honor our heroes while leaving them to suffer from social and economic ills.”

Brown noted that there are around two million veterans living in California. View the Governor’s entire proclamation is below:

Veterans Day began as Armistice Day, a holiday commemorating the end of World War I on November 11, 1918. All too soon, it became clear that this had not been the “War to End All Wars” as some optimists claimed. After a second global conflict that dwarfed the first in its magnitude of destruction, countries around the world began changing their observance to encompass all conflicts and honor those who served. Our own Veterans Day was established as a national holiday by congressional resolution and presidential proclamation in 1954.

Today, nearly 2 million veterans live in California. Among them are men and women who served in World War II, the Korean War, the Vietnam War, the Persian Gulf War and our recent wars in Iraq and Afghanistan, as well as various smaller engagements and peacetime deployments. As we remember these brave Americans today, we should consider not only their valor and suffering in the service of our country, but also the challenges they face upon returning home. While the vast majority of veterans return to civilian life easily, many suffer from high rates of disability, poverty, unemployment and homelessness. We cannot glibly claim to honor our heroes while leaving them to suffer from social and economic ills.

This Veterans Day, let us welcome all returning veterans with open arms and, as President Eisenhower wrote in his 1954 proclamation, “Let us reconsecrate ourselves to the task of promoting an enduring peace so that their efforts will not have been in vain.”

NOW THEREFORE I, EDMUND G. BROWN JR., Governor of the State of California, do hereby proclaim November 11, 2017, as “Veterans Day.”

IN WITNESS WHEREOF I have hereunto set my hand and caused the Great Seal of the State of California to be affixed this 2nd day of November 2017.