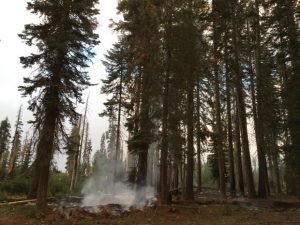 The fire is 1,715 acres and is considered 95-percent contained. The fire was notably slowed due to a high country snowstorm this past weekend. More precipitation is in the forecast for later this week, which will further extinguish the fire. The incident is situated in the Clear Lake/Bourland Mountain area on the Mi-Wok Ranger District. The nearby Rock Creek Trail remains closed. It is burning near the Mountain Complex Fire footprint of 2003.