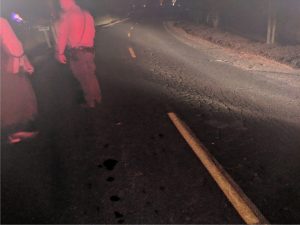 Willow Springs, CA — During the height of the Halloween night celebrations, a man was mediflighted from a scene where trick-or-treaters witnessed a brawl that left him lying in the roadway.

The initial call to Tuolumne County Sheriff’s officials reported that a man had been hit by a vehicle in the 20000 block of Willow Springs Drive near the old Willow Springs market. Once on the scene deputies found a 28-year-old man lying in the roadway unconscious. During questioning, witnesses revealed that the man, angered by a 19-year-old male driver for revving his vehicle’s engine while children were present, reached through an open window and started punching him.

In an effort to break-up the fight, a 36-year-old male stepped in and attempted to separate the two but instead was attacked, according to sheriff’s officials. He told deputies that in self-defense he hit the 28-year-old man with a flashlight, rendering him unconscious.  The victim was airlifted from the scene to a hospital for treatment.  The extent of his injuries and condition are unknown at this time, according to sheriff’s officials.

Sgt. Andrea Benson tells Clarke Broadcasting that since the case is still under investigation and no arrests have been made the names of those involved and the vehicle’s description can not be released. She does note in the case has been forwarded to the district attorney’s office for further review and possible charges. Anyone with information on the incident as asked to contact the sheriff’s office as 209-533-5815.