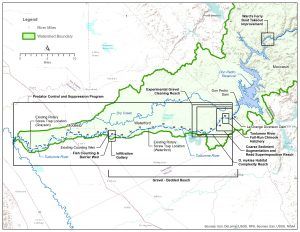 Sonora, CA — Future recreation in the Lake Don Pedro and lower Tuolumne River areas may depend on federal regulators’ buy in to a recently filed plan now awaiting review.

As reported here, the Turlock (TID) and Modesto (MID) irrigation districts, which share rights on the Tuolumne River and ownership of the Don Pedro Project and reservoir powerhouse are deep within multi-year processes involving the re-licensing of Don Pedro Reservoir through the Federal Energy Regulatory Commission (FERC) along with completing a first-time license deemed necessary by FERC to operate La Grange Dam.

In order to secure the La Grange license environmental resource agencies are lobbying for the districts’ management plan to include an enormously expensive fish passage for salmon and trout migration. This push is high on the list of licensing challenges, as both districts insist such a facility would create numerous impacts, including to local recreation — and still not provide a viable solution for protecting those species’ fish populations.

MID spokesperson Melissa Williams recounts that in anticipation of the Don Pedro license renewal, which expired last year, the districts started work on filing for the new one back in 2010. As the process is complex and involves multiple stakeholders the districts anticipate continuing operations under FERC extensions of their present license for some years to come. Too, with review and analysis of the applications will come push backs from agencies and other stakeholders in the weeks and months ahead.

Describing the plan Williams shares, “We lay out what we believe makes the most sense for future operations of the reservoir, recreation and environmental centers in the Tuolumne River below Don Pedro.” When asked how the partners dealt with the issue of the fish passage, TID spokesperson Steve Boyd points to a FERC-ordered feasibility study conducted by the partners, which looked at the height and distance of the reservoir and predators within it to determine if it would be a viable option. “What the study indicated that it is not feasible, so we are not proposing it as part of the La Grange licensing package,” he states.

Making The Case For A ‘Comprehensive’ Approach

Boyd maintains that the districts’ proposed measures provide a comprehensive, balanced approach that can achieve some of the same goals that the the state and other agencies have put forth on recovering the fishery aspects for a fraction of the costs and impacts. “What other agencies were proposing is more than $100 million or more just for a fish passage, versus $159 million for all of the measures that we are proposing,” he states.

The partners’ plan, Boyd emphasizes, covers several components to balance customers’ and environmental needs. Among these are predation management; resources protection; habitat management; building a restoration hatchery. It also calls for changing up some of the environmental flows, in contrast with state regulators’ customary approach of viewing water releases as a management plan’s master variable.

“What our studies indicate very clearly is that we can make significant improvements in the fishery below Don Pedro on the lower Tuolume River for both fall-run chinook salmon and rainbow trout with some very precisely timed water for the life stage of each of the species — and some habitat improvement,” Boyd maintains. “Our lynch-pin study shows that nonnative predators – striped bass and black bass — consume over 90 percent of out-migrating juvenile salmon. So in our view…and you will see it in our plan, is that we need to fix that stressor first before we add water for water’s sake.”

Along with calling for better science and better solutions, the partners maintain their plan is based on sound science — moreover, it is sustainable and achievable. “We think we can meet the goals that we have outlined in the plan, which are maintaining water supply reliability for Tuolumne River agricultural and municipal users and promoting the long term prosperity of the communities we serve,” Boyd says.

Asked about recreational impacts within the districts’ plan, Boyd states outright, “We are not talking about making any changes in fishing within the lake at Don Pedro,” deftly noting several fishing derbies the districts host there every year.

The proposed predation plans in the lower river would mainly focus on reducing the number of striped bass able to move up all the way towards La Grange, where the spawning and incubation areas for fall-run chinook salmon and rainbow trout are located. This would involve installing a barrier weir near Deer Road in the Turlock-Hewson area that would allow boats to move downstream and still bar predator fish from moving upstream. “Over time it would reduce predators in the range and just by reducing existing predators there by ten percent will yield significant increases in the numbers of out-migrating juveniles,” Boyd explains.

On the other hand, a fish passage – should one be required — would probably be a “very, very” large facility set up to collect out-migrating salmon near Wards Ferry. According to Boyd, it could likely directly interfere with rafting takeout the end of the Wild and Scenic whitewater end. “For folks interested in recreation in that upper reach that is something that they really need to be aware of and watching as well,” Boyd stresses.

Boyd and Williams both comment that their districts heard “loud and clear” from Mother Lode residents and recreaters how important whitewater rafting is upstream at Don Pedro and that they put significant funds into the plan to improve the takeout where rafters end near Wards Ferry Bridge.

It is now up to FERC officials to decide if it needs more information from the partners ahead of analysis from environmental and resource agencies, which will have between 60 and 90 days to submit preliminary prescriptions, according to Boyd. He projects the districts would expect by the first quarter of next year to hear what conditions agencies will be trying to attach to the licensing. Sharing his prediction, he comments, “My sense is that the National Marine Fisheries Service and several of the nongovernmental agencies are going to push very hard for a fish passage.”

Even if FERC largely agrees with the districts NMFS and others could still prescribe a mandatory condition beyond that, which could carry over into a trial type hearing or the courts. Factoring an abundance of caution into his prediction, Boyd guesstimates, “I would not expect a license before 2020 — even more realistically, it is probably closer to 2024.”