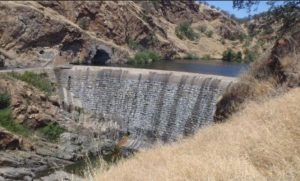 Sonora, CA – Two utility districts tied up in licensing Don Pedro Reservoir and La Grange Dam are continuing to push back against a looming potential mandate that they build a fish passage between the two.

Well in the middle of the multi-year processes involved to re-license Don Pedro Reservoir while obtaining first-time licensing for La Grange Dam, the Turlock (TID) and Modesto (MID) irrigation districts, which share rights on the Tuolumne River and ownership of the Don Pedro Project and reservoir powerhouse, recently held a joint meeting updating the status of their applications.

“One thing that probably a lot of people do not understand is that in the process of re-licensing Don Pedro, the Federal Energy Regulatory Commission (FERC) also told us that we need to license the La Grange Dam, which never had a license on before,” MID spokesperson Samantha Wookey explains. “While the two processes are separate there are a lot of connections between the two…we have to operate them simultaneously with each other…TID has a two mega-watt power plant on the La Grange Dam.”

A primary hampering issue — that might cost the districts $100 million or more — according to Wookey, is that some of the fisheries services want to require that a fish passage be constructed to run from below La Grange Dam over Don Pedro Reservoir for the purpose of funneling them from the Lower Tuolumne to Upper Tuolumne River, as Wookey explains. “This is something that has never been successfully done before but the National Marine Fisheries Services is pretty committed to try to make this happen.”

Chiming in, MID spokesperson Melissa Williams adds, “We have communicated through the re-licensing process…we think we have better science and better solutions than a fish passage — or sending more flows down our river…and this is what we continue to communicate to the public, re-licensing participants and the State Water Resources Control Board (SWRCB).”

Don Pedro’s FERC license expired last April but the districts are able to operate on existing conditions of it, as the extended process continues in coordination with FERC and all the other stakeholder agencies at the federal and state levels. The districts are scheduled to file amended final license applications on Sept. 25. In the meantime, studies over best options for improving habitat conditions continue.

“MID and TID have held fish passage workshops, inviting agencies and the public to try to make it a collaborative process and to work out solutions,” Williams notes. She says that requests for studies and information from other agencies have not been met with much action. What is doubly frustrating, Williams adds, “Mandatory conditioning [authority] gives certain agencies, such as the fisheries, the right to tell us that we need to implement a fish passage.”

As a result, the districts, which have been conducting their own studies for years are now, more than ever, taking it upon themselves to offer other options. Among these are implementing a predation suppression program. “Our science shows that more than 90 percent of out-migrating salmon are consumed by predatory fish before they even breach the San Joaquin River,” Wookey states.

According to the districts’ studies, a ten percent predation reduction would achieve the same improvements without a passage. Or, for that matter, without the water board’s plans to require increased unimpaired flows under its Bay Delta Plan SED (Substitute Environmental Document), although that is a separate battle the districts are dealing with simultaneously.

Among other river and habitat mitigations the districts are also emphasizing are: gravel improvements; stepping up removal efforts of invasive water hyacinth growths; riparian and vegetation expansion; also restructuring some existing operations, such as adjusting times of existing flows.

Wookey and Williams share a collective sigh when asked to guesstimate how and when the licensing process might finally be resolved. “Agencies can drag their feet on certain things as long as they would like — and FERC does not have the authority to direct the other agencies to get their stuff in,” Williams says. “We will turn in our amended finalized license application for Don Pedro and the finalized application for La Grange, but after that it then turns over to the agencies to put in their parts of it and respond to our applications — and for that there is no timeline.”

Stressing significant efforts being made through public meetings, newsletters and websites dedicated to each license application to keep people engaged, both say the districts are grateful for their customers’ patience and public input when it is being gathered.

With such an obviously complicated process of many moving parts, Williams says one thing is for certain: the longer it goes, the more it ultimately costs, especially if any expensive lawsuits come into play. Too, any operational or habitat changes that might eventually come are bound to affect recreation on the lake one way or another. Beckoningly she adds, “We continue to encourage those who enjoy Don Pedro Reservoir to stay engaged in the process.”

For more on the Don Pedro Re-licensing Project, click here. For the latest on the FERC licensing of La Grange Dam, click here; to view the districts’ La Grange Project Fish Barrier Assessment study, a requirement of the licensing process, click here.