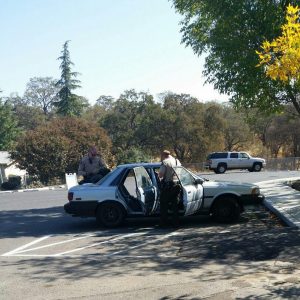 Toyota car that was searched

Jamestown, CA – Tuolumne County Sheriff’s Deputies arrested a man and woman after a search of their car revealed drugs and a weapon.

Deputies were investigating a report of a suspicious vehicle at the Chicken Ranch Casino in Jamestown this weekend. Once on the scene, they questioned 41-year-old Yolanda Saucedo of Turlock and 36-year-old Travis Cross of Delhi. A records check showed Saucedo was on a narcotics searchable probation and that the Toyota’s registration was expired for more than a year.

A search of the vehicle turned up methamphetamine and a loaded, stolen firearm out of Turlock in Cross’ jacket. Cross is a convicted felon and therefore not allowed to have a gun. He faces felony charges related to the gun and drugs while Saucedo is charged with possession of drug paraphernalia and violation of probation.

Of note, as reported here last year, Saucedo was arrested in a similar situation, when a deputy spotted her and another man parked in a car along Chicken Ranch Road in Jamestown. In that incident, a k9 unit did a sniff search of a vehicle and found drugs.