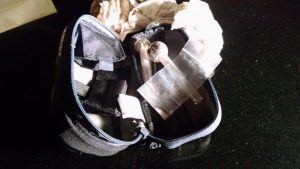 Jamestown, CA — A truck on the side of the road caught the eye of a deputy who stopped to see if the couple inside needed help but instead collared the pair in a drug bust.

The arrested happened Thursday just after 1 a.m., when a deputy spotted a 1993 GMC pick-up truck parked on Chicken Ranch Road in Jamestown and stopped to investigate. A records check determined the pair was on probation for narcotics charges.  A K-9 unit was called to the scene to check for possible narcotics. K-9 Hans was able to sniff out and alerted his handler to the presence of drugs inside the truck. A further search uncovered two smoking pipes and a small amount of methamphetamine.

Arrested were 37-year-old John Owens from Turlock and 40-year-old Yolanda Saucedo from Livingston. Both face possession of methamphetamine and drug use paraphernalia charges and booked at the Tuolumne County Jail. The pair was released with a date to appear in court, according to sheriff’s officials.