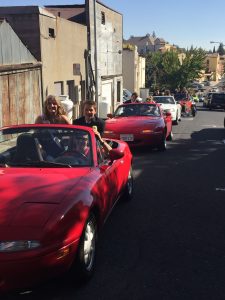 Update at 2:49 p.m.:Courthouse park was crowded with Sonora High School Wildcat fans for the Homecoming Parade. Students in the Golden Regiment Band marched down Washington Street and many other students rode on various vehicles as seen in the photos.

Tonight at Homecoming the Wildcats football team will take on the Lindon Lions on Dunlavey Field as detailed here. The junior varsity football teams will play at 5:30 p.m.; the varsity game gets underway at about 7:00 pm. During Sonora’s varsity game half time the homecoming queen will be crowned. The Queen Candidates are Suzanna Ellis, Jessamyn Skutches, Riley Peterson, Victoria “Tori” French and Shara Rosasco. After the game students are welcome to attend the annual Homecoming dance.

Several streets will be closed beginning at about 1:15 p.m. and remain shut down until 3 p.m.

Wildcat fans will crowd the streets for their Homecoming Parade at 2:20 p.m.. Students in the Golden Regiment Band will march down Washington Street/Highway 49 and the homecoming court will be escorted in various vehicles. Shop windows in historic downtown Sonora have been decorated with displays of this year’s theme: fairy tales. The four class floats are decorated as Princess and the Pea for the Freshman, Sword in the Stone for Sophomores, Hansel and Gretel for the Juniors, and the Senior’s float has a Jack and the Bean Stalk theme.

Following the parade the Golden Regiment Band will perform several songs in Courthouse Park. The band is celebrating 35 years with a dinner, a commemorative 35th anniversary T-shirt and more, details are here.