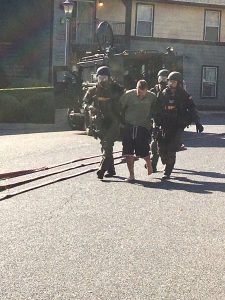 Update at 3:30 p.m.: Tuolumne County Sheriff’s spokesperson Sgt. Andrea Benson reports tear gas was used to end a standoff with a man holed up at the Oak Hills Apartments on Preston Lane in Jamestown.

She details that the SWAT Team entered the apartment building at around 3:20 p.m. and took 41-year-old Christopher Clark into custody safely. Clark had barricaded himself and his dog “Blue” in an apartment around 6:51 a.m. after a reported domestic violence dispute, according to Sgt. Benson, who indicates that the victim had left the apartment before deputies arrived. She adds that Clark refused come to the door or exit the apartment as ordered by deputies that prompting the evacuation of the apartment complex before 7:30 a.m. Sgt. Benson shares that deputies were able to retrieve the dog before the SWAT Team stormed the building.

Sheriff’s officials note that authorities are clearing the scene and it will be accessible to residents shortly. Negotiators relayed that Clark did not want to come out of the apartment for fear of being arrested, according to Sgt. Benson.

Update at 2:45 p.m.: Tuolumne County Sheriff’s officials report that deputies continue to  communicate with a subject who remains holed up in a Jamestown apartment since this morning.

According to sheriff’s spokesperson Sgt. Andrea Benson, few details about the dialog are available to help ensure public safety. However, she shares, this update “The Sheriff’s Office has called the school and the area is still taped off. There’s personnel there that can assist people and meet with those trying to return to their homes.”

SWAT and Crisis Negotiations Team as well as fire personnel have been at the scene all day and continue to communicate with the man,” although there have been no changes to report.

Update at 9:50am: The subject remains barricaded inside the apartment, and the building has been evacuated. The sheriff’s office is hoping for a peaceful resolution.

Original story posted at 8:50am: Jamestown, CA — The Tuolumne County Sheriff’s Office is urging residents to stay away from the Oak Hills Apartments on Preston Lane in Jamestown.

The sheriff’s office responded to a report of a disturbance at the location this morning, and a person is currently barricaded inside. We’ll pass along more information when it becomes available.