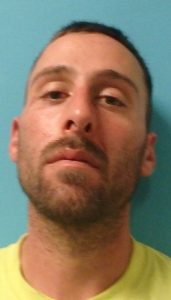 Sonora, CA — A Sonora man was arrested for allegedly biting his girlfriend to make her let go of a tree she was holding onto before he carried her back into a home.

The incident came to light Wednesday afternoon when Sonora Police were alerted to a woman being treated for her injuries at Adventist Health Sonora. Officers learned that 32-year-old Joshua Roy Perry had argued with the victim that morning at a residence in the 600 block of Shaws Flat Road. Acting Sonora Police Chief Turu VanderWiel describes that during the argument, the victim repeatedly tried to leave the house but Perry blocked her path and threw her to the floor where they struggled. She eventually escaped through a window. Chief VanderWiel details, “During the struggle to bring her back into the residence, Perry actually bit her to get her to release her grasp on a tree she was holding.”