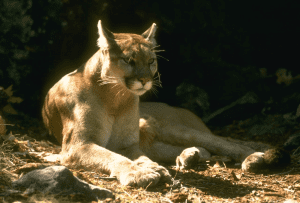 Groveland, CA — A sleepover under the stars with her grandsons that turned deadly shocked a Groveland woman to the core when a mountain lion crept onto the front porch as they slept.

Grace Wallace, a Pine Mountain Lake resident, lives on Tannahill Drive about a stone’s throw away from the subdivision’s security office. Although she describes herself as a backcountry person with a love for mountain lions and other wildlife, she says her life experience did not completely prepare her for the early morning encounter that happened this past Sunday around 3 a.m.

“My grandsons were sound asleep right by the entrance to the house by the living room door,” Wallace recounts, adding she had taken a position closer to the porch steps; worried about a she-bear with cubs that had recently been making rounds of the neighborhood and breaking into a few homes, although she had also spotted two mountain lions near the mailboxes a few days before. Ironically, it was a stray kitty that first awoke her, leading Wallace to think it only wanted to “love and hug and purr” a bit. However, less than ten minutes later its predator boldly arrived on the steps.

View To A Kill

“I was sitting up by then, smoking a cigarette, watching a video [on a tablet computer],” Wallace describes, as the lion slid up the steps like a house cat. Still marveling at the big cat’s brazenness, she continues, “It grabbed the kitty’s head — and killed it. I stood up because I was in between the boys – woke the boys up — they and the puppy got in the house — and that cat would not back up off of me with that dead cat in its mouth. It just stood there growling at me.”

Taking one step forward towards the cougar as the boys, ages eight and six, were stumbling to get into the front door behind her, Wallace recalls that the big cat slid down a few stairs. Then, she says, “It put its paw on the [domestic] cat, lowered its ears and crouched as if to spring — and I backed up into the house.” She finishes the tale with a broad exhale.

Wildlife experts say there are a few thousand mountain lions across California, quietly living much closer to us than we even know but that the species, protected in the state although not currently endangered, is known for being mostly elusive and solitary.

Statistics from the California Fish and Wildlife (CDFW) website currently cover cougar-related attacks and fatalities across the state from around the turn of the previous century through 2014. These indicate that over the period the agency has “verified” — through either a physician, law enforcement officer or its own personnel — a total of 21 physical attacks by cougars involving injuries to humans of which seven have resulted in deaths. Helen McGinnis, who is a puma rewilding advocate for causes focusing in Midwestern and eastern North America also maintains a spreadsheet across the continent from 2000 through this year. To CDFW’s accounting, she adds just one — a nonfatal attack — in California between 2014 and 2017.

Lion Was Out Of ‘The Norm’

Wallace, over a lifetime of around 60 years personally counts five fairly close brushes with cougars, none of which involved a physical encounter. She also describes her Groveland residence of the past five years as on a kind of wildlife corridor, where many deer and their babies often roam — and where just two months back she spied a mountain lion in lazy prey mode on the garage roof about 30 feet from the house.

Of her front porch scare she emphasizes, “This is the first time I have had an animal do something what I would call stupid — this is not the norm.” Far from seeming sickly or out of sorts, this lion, as she describes it, was plump and well-muscled with a big broad head. “Even though it was only seconds it felt like minutes — I got a good long look. I do have a lock of its fur because it scraped itself going down the stairs and was thinking — if someone ends up dead I have DNA,” she laughs ruefully. Shaking her head, she remarks, “That cat knows no boundaries — not intimidated by things a normal wild animal would have been intimidated by – videos going, cigarette smoke, a porch light, multiple people – and a growling dog.”

Within a few hours of the encounter, Wallace confides she had already reached out, reported the incident to CDFW and had additionally filed a depredation form to either take down the animal or hire a professional hunter to do so. “I was told to be careful because I would probably see it again,” she states. She adds that the wildlife officer informed her of a female mountain lion with two cubs that were spotted at the neighborhood’s restaurant later that next day.

As for lessons learned, Wallace admits she and her grandsons will probably not be having any more sleepovers on the porch since it failed to provide them with the relatively safe shelter that she thought it would. She also sends a cautionary call-out to any neighbors living across from the golf course with cats that normally free-range on leashes between their duplex balconies and adjacent grass. “There are mountain lions out there and this particularly one is oddly bold. I don’t now what other words to use,” Wallace warns. She admits to worrying about her boys, perhaps out riding their bikes and then coming up the front steps on the way into the house. “The cat could be there — and take them out right here on this porch,” she somberly notes.

Describing Pine Mountain Lake as on the borderline of “being overrun with cats,” Wallace opines it might be time for wildlife officials to consider that things might be getting a bit out of balance. “Thirty years ago in this county you were seriously lucky to see them and now they are all over,” she maintains. “This [encounter] is more than seeing one run across the road. I do see [cougars] — all the time — but once this one came up on the porch that changed everything for me, mainly because it would have been extremely easy for it to have gotten past me and gotten the smallest grandkid…it would have been bad.”

Pondering back on that for a few seconds, she chuckles, marveling, “Neither boy generally wakes up very easily…but they heard my voice and the way I said it, my oldest one says he knew there was no playing around…I don’t know what I would have done their normal ‘whaat-why? C’mon, five more minutes’!”

CDFW Region 4 spokesperson Peter Tira says while the agency receives very few human-related calls it literally gets hundreds of reports every year of mountain lions killing pets and livestock. He directs local residents to report mountain lion conflicts by contacting the Fresno office at 559 243-4005 and to call 911 in the event of any emergency situation.

For more CDFW resources on the topic, click here. For specific tips on what to do in the event of a mountain lion encounter, click here.