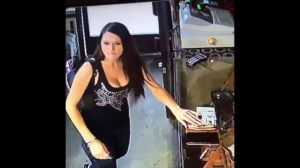 Sonora, CA –A woman caught stealing on surveillance video from an Oakdale business is behind bars within hours of the footage going viral.

An alert clerk spotted the alleged thief, who was wearing the same clothes as in the footage, at a store in Sonora’s Junction Shopping Center and called 911. The earlier posted surveillance video showed a woman stealing a wallet and cell phone around 11 a.m. in the neighboring county. Later that afternoon, deputies responded to the Kohl’s store where a worker directed them to a woman matching the description of the suspect seen on the video. Tuolumne County Sheriff’s officials arrested 24-year-old Ashley Davidson who initially gave a false name to deputies. Davidson was booked into the Tuolumne County Jail for three outstanding felony warrants for grand theft and false impersonation.

The sheriff’s office praises the community involvement is essential in the fight against crime and is what ultimately led to this arrest.