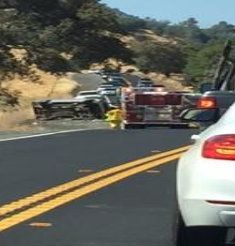 Update at 5 p.m.: The CHP reports the wreckage has been cleared and traffic is moving once again. One person was flown to a Modesto hospital suffering major injuries.

Update at 4:45 p.m.: The CHP reports major injuries in the crash. A tow crew is working to remove the wreckage that is blocking one lane. Traffic is slow going as officers are directing one-way traffic control.

Update at 4:30 p.m.: A ground and air ambulance are on the scene of a solo-vehicle crash on Highway 4 west of Hunt Road near Angels Camp. There is no word on injuries but the CHP reports two people and a dog were in a van that overturned on its side. Traffic is backed up as the wreckage is blocking one lane of the highway and officers are directing one-way traffic control.

A special thanks to our community partner Mareena White for sending in a photo.

Original post at 4:16 p.m.: Angels Camp, CA — Emergency crews are on the scene of a solo-vehicle crash on Highway 4 in Calaveras County near Angels Camp.

The CHP reports a van has overturned and landed on its side blocking one lane of traffic just west of Hunt Road. Additionally, there are reports of a person lying in the roadway. An air and ground ambulance have been called to the scene. The CHP reports two individuals were in the van along with a dog. Officers are directing one-way traffic, which is getting backed up in both directions.  We’ll bring you more details as soon as they come into the newsroom.