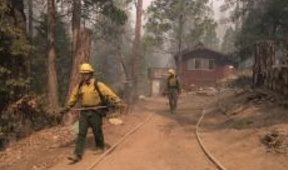 Yosemite, CA – As the last of the mandatory evacuations were lifted Thursday, firefighters continue to make progress on the South Fork fire burning in Yosemite National Park overnight.

The fire’s containment jumped from 25 to 44 percent while the acreage slowly climbed 142 acres to 4,330.  The Wawona Campground has reopened but trails within the fire area remain closed until further notice. All roads within the park are open.

Worry of possible bad weather by park officials have subsided as they advise that temperatures are predicted to be near normal and the threat of storms through the next week have diminished. However, smoke and poor air quality will continue to impact the park. (Click here Central Sierra Fires Area for the park’s smoke outlook.)

The remaining 304 fire personnel continue to mop up and extinguish hot spots on the blaze’s edge as well as monitor the perimeter. The flames broke out on August 13 and the cause is still under investigation.