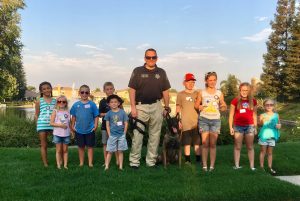 Update at 4:15pm: Tuolumne County law officials along with the Modesto Police Department are sharing their grief over the untimely death of one of their own at the hands of an alleged drunk driver.

This afternoon, Modesto Police identified that it was Sgt. Michael Pershall from their department who was killed Tuesday night after being hit while off-duty and riding his bicycle along Merle Avenue in his neighborhood. (An earlier story on the incident follows below after this update.)

Pershall was initially hired back in 2008 as a deputy by Tuolumne County Sheriff Jim Mele, as the sheriff recalls. He adds that during his time working in the Mother Lode Pershall solidified a career and made life-long friends within the sheriff’s office before transitioning over to the Modesto Police Department in 2012.

Mele recounts, “He was very well loved — and not just liked — Mike was a very caring young man, loved to do police work, was a member of the SWAT Team…he just enjoyed life.” Sharing the last time the two talked just about two months ago, Sheriff Mele confides, “I remember exactly what he said. He said, ‘Hey, Jimbo, how’s it going?’ It wasn’t “Sheriff’ or anything like that. He was just a fine, fun young man and he is going to be truly missed.”

As much as he made a positive difference locally, Sheriff Mele notes, “More importantly , he was a father [of two boys, 16 and 10] and husband and our thoughts are with the Pershall family and the Modesto Police Department…we are here for them.”

According to the CHP, the fatal collision remains under investigation and the driver of the vehicle who hit Pershall, 32-year-old Matthew Gibbs of Modesto, has been charged with homicide and several driving under the influence related charges.

Pershall, who had recently been promoted to the rank of sergeant, was a nine-year veteran within the Modesto Police Department; serving as a Canine Handler, Field Training Officer, Police Explorer Advisor and negotiator for the Critical Incident Team.

Police officials state that Pershall was instrumental in training and mentoring new officers, teaching them the fundamentals of being a public servant and community guardian; also leading by example as a volunteer advisor for the Police Explorer Program, a mentoring and development program for youth ages 15 through 21. As a canine handler, Pershall actively took part in community outreach, providing with his partner “Ike” K9 presentations and demonstrations to community groups, schools and youth organizations. In his most recent outing, the pair visited several block parties at this year’s National Night Out.

Modesto Police Chief Galen Carroll states, “Mike’s loss creates a tremendous void within our organization and within the hearts of those he touched. We are forever grateful for the moments we shared with him.” To view a slideshow of images provided by the Modesto Police Department click into the image box.

Original Post at 7:44am: Modesto, CA — An off-duty Modesto Police Sgt. riding a bicycle was tragically killed last night after being hit by an alleged drunk driver.

The name of the victim has not been released at this time. KCRA 3 in Sacramento reports that the law enforcement official had been with the Modesto PD since 2012 and previously worked for the Tuolumne County Sheriff’s Office.

The CHP reports the crash happened at 6:09pm on Merle Avenue near Fine Avenue. 32-year-old Matthew Gibbs of Modesto was arrested for causing the crash and booked into Stanislaus County Jail. The CHP notes that Gibbs allowed his vehicle to drift into the opposing traffic lane and strike the rear of the bicycle. The car eventually went onto the curb and also hit a fire hydrant. The off-duty officer was pronounced dead at the scene.