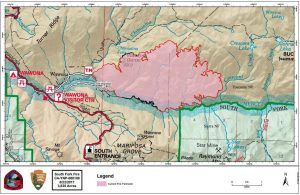 Update at 1:27pm:  Yosemite fire officials have signaled the South Fork Fire-related evacuation order for Wawona residents will be lifted early tomorrow with a few caveats.

Officials say beginning at 7 a.m. residents, homeowners and employees only may return and that identifications will be required.  However, the evacuation area east of Chilnualna Creek remains closed. For more details, read today’s overage below.

Original Post at 12:16pm: Sonora, CA — The South Fork Fire burning on the fringe of the Yosemite community of Wawona, now incrementally larger and 17 percent contained heads the list of current concerns among forest officials.

Air quality continues to read into the unhealthy range in the Wawona area into Yosemite West. Mandatory evacuations remain in place in Wawona for the area east of Highway 41 on Forest Drive and Chilnualna Falls Road. Fire officials report that burning operations above Wawona were successful yesterday as crews brought the fire down the containment line to the South Fork of the Merced.

Today, plans are for crews to finish burning the lower area along the Merced and continue mopping up on the west side. Firefighters now working within the southeast portion of the fire are checking eastern spread and monitoring the fire line north of the river.

Officials share that strategic objectives are to continue suppression efforts by utilizing air and ground resources to hold the western and southern flanks while monitoring the northern and eastern edges. Minimal impact suppression tactics are being used in the Yosemite Wilderness to manage the fire area, using natural barriers such as rocks or streams, trails, and other minimal disturbance methods to contain it. See the image box for a current map of the fire footprint. Currently 765 personnel are assigned to the incident; among them 22 hand crews, 7 helicopters and 20 engines.

While a lightning strike may have possibly ignited the blaze, which broke out in the afternoon of Aug. 13, no official cause has as of yet been released. Although thunderstorm activity is expected again today and may cause erratic winds over the fire area, storms are predicted to decrease throughout the week as higher pressure systems move into the region.

The Douglas Fire, which ignited July 31 and is now at 163 acres south of the Douglas picnic area on Highway 108, has grown in its the southern area due to management operations. These are focusing on strengthening containment lines to prevent higher intensity, uphill spread and buffer fire spread near private properties. Officials anticipate this strategy will continue as optimal fuel moisture and weather conditions exist to continue using the opportunity of a lightning-caused fire to restore a natural fire cycle in the forest.

At this time, Stanislaus National Forest closure order STF-16-2017-06 remains in effect for public safety. This requires visitors to remain outside of the following areas: Road 6N40Y starting 300 feet south of its intersection with the Middle Fork of the Stanislaus River and continuing approximately 1.5 miles to the southwest; and all areas within 0.5 miles south and southeast of the 6N40Y road closure.

Over the course of this past weekend the Summit Ranger District on the Stanislaus National Forest (SDF) experienced multiple lightning strikes that ignited more than 20 new single-tree fires. Officials note that the weather forecast, which calls for thunderstorms, may produce more lightning strikes through Wednesday and bring significant high temperatures through the coming weekend.

As SDF spokesperson Diana Fredlund explains, a single-tree fire resulting from a lightning strike sometimes produces little or no fire activity around it but require monitoring for obvious reasons. She adds that six of these new fire starts are in the Emigrant Wilderness. (To view a map of the lightning strikes within the past 24 hours, click into the image box slideshow.) Since these incidents are all in adapted environments that rely on fire to reproduce and consume downed wood and timber litter, firefighters are stewarding this natural process by allowing low-intensity fires to burn under specific conditions. Firefighters from the Stanislaus, Sequoia, San Bernardino, Angeles and Los Padres National Forests, as well as those from the Tuolumne Band of the Me-Wuk Indians, are collectively managing these fires while maintaining safety as their highest priority.

Hikers, Campers Encouraged To Check In

Forest visitors are encouraged to contact the ranger districts for the latest information relating to potential accessibility impacts to certain trails and campgrounds in the Emigrant Wilderness and the Highway 108 corridor. Fredlund points out fire managers are using daily reconnaissance flights to brief desk staff on the most up-to-date information.

While currently there are no trail closures and no threats to infrastructure potential closures may come, based on current and expected fire behavior. The fires themselves may be visible from the high country, including the Emigrant and Carson-Iceberg Wilderness areas and may be seen from many viewpoints in the immediate area off Highway 108.

For status information, contact the ranger district offices at the listed numbers below: