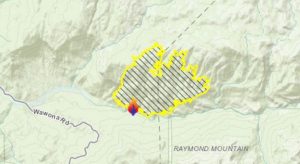 Yosemite, CA – The community of Wawona is being evacuated due to the flames from the South Fork Fire burning in Yosemite National Park.

The blaze is burning near the South Fork of the Merced River; approximately one mile upstream from Swinging Bridge and has grown by nearly 500 acres overnight to 2,903 with just 10 percent containment prompting the evacuations. Park Fire officials attribute the acreage hike to downdraft winds from thunderstorms. Those forced out of the homes are in the areas east of Highway 41 along Chilnualna Falls Road and Forest Drive, including the Big Trees Lodge. Additionally, the area is closed to visitors and guest. Park fire officials say residents and visitors must evacuate by 4 p.m. today.  A Red Cross Shelter has been set up at Tenaya Lodge located at 1122 Highway 41 in Fish Camp. A community meeting that was schedule to be held in Wawona has been moved to the Tenaya Lodge and begins at 6:00 p.m.

Park fire officials report that crews are continuing to work on containing spot fires that were sparked late Friday afternoon and evening. Additionally, air and ground resources are being utilized to hold the western and southern flanks while monitoring the northern and eastern edges.

There are currently 528 personnel assigned to the fire including 13 hand crews, 7 helicopters, 11 engines, and 3 air tankers. The estimated blaze containment is Sunday, September 3.