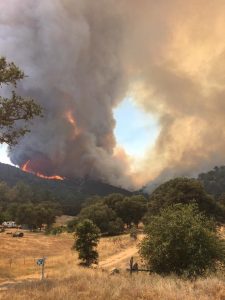 Congressman Tom McClintock delivered a speech on the US House Floor regarding the Detwiler Fire in Mariposa County.

McClintock was Wednesday’s KVML “Newsmaker of the Day”. Here are his words:

I want to begin by saluting the more than 5,000 firefighters from 40 cooperating agencies that assembled under the coordination of CALFIRE to battle the Detwiler fire that threatened Yosemite Valley and its gateway communities.

I spent Saturday at the command centers in Mariposa and Merced Counties and what I saw is what I have seen time and again at so many fires we are having these days in the Sierra: cool, calm professionalism, selflessness and devotion to duty.

CalFIRE is an agency that works. I want particularly to salute and thank Nancy Koerperich, CalFIRE’s Unit Fire Chief for Madera, Mariposa and Merced. She and her operation literally saved several towns – including Mariposa and Coulterville – from annihilation last week.

Sheriff Doug Binnewies of Mariposa County is rightly being hailed for his courage and leadership in directing the orderly evacuation of the town of Mariposa as the fire bore down upon it. You can literally see how the fire burned right up to the town’s edge. I can’t tell you how many homes I saw where firefighters stopped it within a few feet of the front doors.

CalFire Battalion Chief Jeremy Rahn told me that the difference between saving and losing so many homes was defensible space. CalFire has produced a superb phone app to assist homeowners in preparing their home so that if – God forbid — the need arises, firefighters will be able to defend it. It also provides fire alerts and anyone in the mountain communities should have it. It’s free for downloading at your phone’s app store.

I cannot say enough about the firefighters who have been working in triple digit heat in 24 hour shifts to battle the flames, or the air crews that dropped a staggering 500,000 gallons of fire retardant in a single day at the height of the conflagration. Their effectiveness can be seen by red borders of fire retardant that separate the blackened ground of the fire on one side and the landscape they saved on the other.

They not only saved these communities and hundreds of homes – they also stopped the fire within just a few miles of the Stanislaus National Forest – a forest that is dying because of federal environmental restrictions on forest management. The firefighters warned that if the fire reached these vast stands of dead trees, the fire would have exploded with the force of an atomic bomb.

And that is the fine point of the matter. I spoke with Mariposa County Supervisor Marshall Long and the firefighters at the Mariposa command center and the one thing they stressed time and again is that they need relief from the regulations that are making it almost impossible to create firebreaks, thin the forests and remove the excess fuels.

These laws have made it all but impossible to keep our forests properly managed, and the result is severe overcrowding. The Sierra Nevada support between 20 and 100 trees per acre, depending on the topography. The average tree density is now 266 trees per acre. This extreme overcrowding has stressed the trees to the point they can no longer resist drought, beetle infestation and disease. This has caused a massive tree die-off, and we have entire national forests just waiting to explode with over 100 million dead trees.

The heroic firefighters of the Detwiler fire have kept it out of these hazard zones – but the hazard zones are still there. And consider this: we’re only at the very beginning of the fire season that combines fresh brush from last year’s rains with millions of dead trees that were too stressed from overcrowding to survive the drought. And the firefighters I spoke with on Saturday bitterly complained they can’t even cut firebreaks to isolate these zones because of the same so-called environmental laws.

The House has pending before it the Resilient Federal Forests Act of 2017 that would allow us to restore good forest management – but we may already have run afoul of what Churchill called “History’s terrible, chilling words: TOO LATE.”

Mr. Speaker, I call for expeditious consideration of the Resilient Federal Forests Act and other legislation to save our forests, in the hope that firefighters can hold these fires at bay until we restore good management to our public lands.”