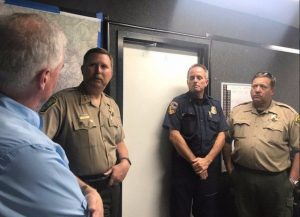 Washington, DC — On the US House floor, Congressman Tom McClintock praised the heroics of firefighters and first responders assigned to the Detwiler Fire in Mariposa County.

McClintock, who was in Mariposa on Saturday, spoke about their “cool and calm professionalism, selflessness, and devotion to duty.” He specifically referenced the leadership of Nancy Koerperich, CAL Fire’s Madera-Mariposa-Madera Unit Chief and Doug Binnesweis, Mariposa County Sheriff.

The Congressman also took a jab at federal forest policies, stating that, “They (firefighters) not only saved these communities and hundreds of homes, they also stopped the fire within just a few miles of the Stanislaus National Forest, a forest that is dying, because of federal environmental restrictions on forest management. The firefighters warned that if the fire had reached these vast stands of dead trees, the fire would have exploded with atomic force.”

He added, “The heroic firefighters of Detwiler Fire have kept it out of these hazard zones, but the hazard zones are still there.”