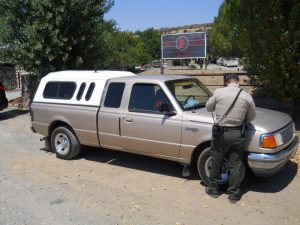 Jamestown, CA — Two Oakdale residents, who told deputies they were in the area looking for a local casino after going fishing, were arrested when their truck ran out of gas.

Tuolumne County Sheriff’s deputies responded and spoke to the men, identified as 48-year-old Jamie Theiler and 54-year-old Grant Dale, both of Oakdale. They said they had been fishing,  and later decided to head to a local casino, but ran out of gasoline. Deputies noticed the ignition to the truck was damaged, and a records check showed that it was stolen out of Oakdale. Both men were arrested for possessing the stolen truck, and Theiler was also cited for possession of methamphetamine.