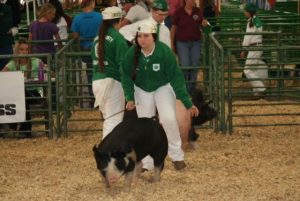 Sonora, CA — The 2017 Mother Lode Fair came to a close, and it was a record breaking year for the large livestock auction.

Ron Hamilton, one of the 4H leaders, reports it was a similar number of animals as 2016, but the record for the amount raised was eclipsed by around $100,000. Businesses and community members placed bids on the livestock, and the money raised goes back to the local youths. Click here to view a video.

Attendance figures for the fair are not immediately available.