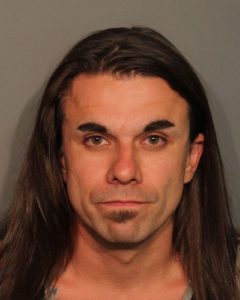 Angels Camp, CA — A man who officials say had relocated to Calaveras County for opportunities in the marijuana industry, was arrested on charges related to assault with a deadly weapon.

The Angels Camp Police Department responded to a report of “suspicious people in the roadway” near the intersection of Gold Cliff Road and Pacific Avenue in Angels Camp. The two individuals were located, and claimed they were assaulted by a man who had a firearm. The police department learned that they were staying at the residence of 35-year-old Wyatt Phillip Tripp, who had recently moved to Calaveras County, from Orange County, for opportunities in the cannabis industry.

Officers responded to his residence in the 900 block of Crystal Street and located a handgun, ammunition, 57 seedling marijuana plants, and remnants of items used in manufacturing butane honey oil. Tripp admitted to getting into an altercation with the two people living with him, but denied using a handgun to speed up their departure.

A 14 year old that was present during the incident was interviewed and confirmed that the handgun recovered was used during the altercation, according to the police department.

Tripp was arrested on charges of assault with a deadly weapon and child endangerment.  The Calaveras County District Attorney’s Office has reviewed the case and added charges related to manufacturing of a controlled substance (butane honey oil). Angels Camp is also pursuing penalties, via code compliance, related to the marijuana located.