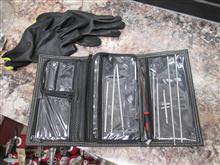 Sonora, CA — Tuolumne County Sheriff’s officials were dispatched to a burglary alarm at Banks Motorsports, and two men were seen loitering nearby.

The Sheriff’s Office reports that it happened at 1am on Saturday morning. There were no signs of a break-in and the building appeared secure. One of the men near the business was 24-year-old Spencer Stewart of Jamestown, who was in possession of lock picking tools, methamphetamine and hypodermic needles. Stewart was arrested and booked into Tuolumne County Jail for possession of burglary tools, possession of meth, drug paraphernalia and outstanding warrants.

The business is located on Village Drive in Sonora.