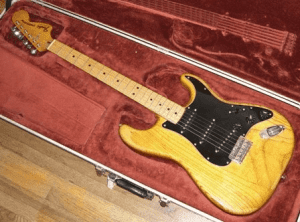 Sonora, CA — Unaware, while Kent Rosen and his band were rocking out at a Second Saturday gig in downtown Sonora, thieves had broken into his Jamestown home and were carrying away about $14,000 worth of valuables and memories.

Speaking with Clarke Broadcasting today, Rosen admits that while his family’s practice is generally to not lock their doors, the perpetrators did not even bother with rattling any doorknobs; they just cut a window screen and made entry through his daughter’s bedroom window. Fortunately, he says, no one was at home at that point. However, in hindsight his daughter recalls, as she was leaving the residence, seeing a silver vehicle with two mean sitting at the top of their driveway, barely giving it more than a thought.

Now, Rosen says, she, his wife and he are all feeling creeped out and violated, ruminating the loss of a couple of cash stashes and several possessions; among the latter Rosen notes several treasured — although not highly market-valued — guitars, as well as some inherited firearms he had failed to secure within a gun safe; tools and his daughter’s laptop computer.

“If I can be a shining example of what not to do, I guess I am happy to do that,” Rosen says sheepishly. Plans to install a driveway gate and security cameras are in the works, not to mention more careful protocols around securing the family abode and perhaps not sharing as freely and openly with casual acquaintances about the details of their home life and schedules.

Although the Tuolumne County Sheriff’s Office has an accounting of the stolen items with accompanying images, Rosen, especially anxious to get his instruments back, shared those photos with Clarke Broadcasting (to view them, click into the image box slideshow), and mentioned being willing to provide some kind of anonymous reward, no questions asked. Anyone seeing any of the instruments or with any information should call the sheriff’s office.

Rosen describes the guitars as follows: a 1960’s Teisco Red Shark Fin with brushed aluminum, 4/2 tuners, pickups and switches; a 1963 Duo Sonic Sunburst; a 1970’s well-worn Fender Telecaster with Glendale bridge plate, maple neck; a Fender Telecaster, custom-made yellow with a mahogany neck marked with the letter “G” on the head stock taken inside its SKB flight case; a Teisco Rodeo with rounded cutaway, two gold-foil pickups and fancy binding (3 1/4 size electric); and a Dobro Resonator with white binding on the front, a rear-bounded neck, no name mark but two glow-in-the-dark skulls on it as well as a dark armrest area ding.

One In A String Of Recent Burglaries

According to sheriff’s spokesperson Sgt. Andrea Benson, her office has received seven burglary reports in as many days, counting the above-described one from the Rosen residence.

Two of the incidents targeted vacation homes in Strawberry and four occurred in sheds and outbuildings through Twain Harte and Jamestown. Of the vacation homes, one was entered through a door that was kicked in; the other a pried-open window. In these incidents a firearm, a generator and a box of solar panels were pilfered. Numerous tools, equipment and a custom trailer were taken from the four storage shed burglaries. Altogether, the sheriff’s office estimates the thefts as totaling somewhere in the neighborhood of $73,000.

Sgt. Benson provides several timely strategizes to help safeguard your home against a break in whether or not you are away on vacation:

-Get a home security system that deters thieves with noise or an automatic call-in to the police; live wi-fi surveillance systems available allow owners to watch over your home when away via a computer or smart phone. She notes that the Sheriff’s Office has captured several thieves for homeowners using their live systems. Be sure to use the yard sign and window decals that say your house is protected by a home security system and regularly check to make sure the sign is there and readily visible. Never post your pass code next to or on the home security alarm key pad.

-Consider attaching windows to such a system and have locks that operate from the inside so they can be used for escape; use a metal or wooden rod in the track on sliding glass windows and doors to prevent them from sliding open; never leave a ladder that can be used to access the roof or a second story window.

-Improve outside lighting with motion detection as thieves may opt to bypass a well-lit home.

-Make sure you have strong exterior doors made of solid wood or metal to sustain attempted kick-ins and use strong deadbolts and other door hardware with anti-saw pins. Treat garage doors like exterior doors using the same protection equipment.

-Block basement windows or install locked window well covers that can help prevent thieves from seeing into or entering the house from below.

-Install locks and/or locking slides for pet doors, which otherwise may provide a tempting entry point.

-Do not advertise that you are away by removing obvious signs such as collections of mail and/or newspapers and installing light and tv/radio timers with battery backups that continue to operate even during power failures.

-Get to know your neighbors and keep your eyes out for each other — and report suspicious vehicles and persons in the area.

-Turn your phone ringer volume down so someone standing outside cannot hear it ring and if you can, have your calls forwarded when away as burglars sometimes call to see if someone is home before a break in.

-Arrange to have your lawn cut or snow removed from your walkways and driveway if you are going to be gone for a long period of time.

-Instead of stopping your mail and newspaper delivery, ask a neighbor to pick these up and hold them for you; seeing deliveries being made makes a burglar think someone is at home. Similarly, have a neighbor use your trashcan from time to time as well as place it out at the curb and bring it back on trash day.

-In the interest of home security, never leave notes on the door. They just say to a burglar, “Come on in.”

-Remove the possibility for a crime of opportunity by never leaving doors or windows unlocked; never hide a house key outside where it can be easily found.

–Keep a detailed inventory of your valuable possessions, including a description of the items, date of purchase, original value and serial numbers. Keep a copy in a safe place away from home in the event of a fire or other disaster. Make a photographic or video record of valuable objects, heirlooms and antiques. Your insurance company can provide assistance in making and keeping your inventory, which will assist law enforcement in returning those items to you, if found.

–If your home is broken into, please call law enforcement immediately; do not touch anything or clean up until the police have inspected for evidence. Write down the license plate numbers of any suspicious vehicles and note the descriptions of any suspicious persons.

To report any suspicious vehicles, persons and activity, call the Sheriff’s Office at 209 533-5815.