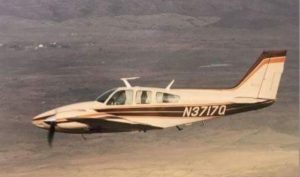 Columbia, CA — Search and rescue teams are looking for 75-year-old LeRoy Del Don after his plane left a Patterson airport and never arrived at the destination in Columbia.

Del Don, a flight instructor, who has been flying for over 40 years, has no known medical issues. He left Patterson late Friday evening in his personal plane, a twin engine Beechcraft Baron 55, and was scheduled to arrive at the Columbia airport. He has made several similar type trips in the past. Del Don was then going to drive to Pinecrest in a vehicle that was waiting for him at the hanger.

When Del Don did not arrive in Pinecrest, his wife became concerned, and asked a friend to check the hanger at Columbia Airport for the plane. The vehicle was located, but no plane.

Del Don’s plane was last tracked by Air Force Rescue over a mountainous area in Calaveras County. Search and rescue teams from Calaveras and Tuolumne counties are conducting search efforts.

Anyone with information on Del Don, or his plane, should contact the Calaveras County Sheriff’s Office at 209-754-6500.