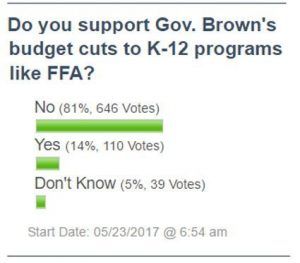 An informal poll question was posted on MyMotherLode on May 23rd asking, “Do you support Gov. Brown’s budget cuts to K-12 programs like FFA?” A full 81 percent said No, 14 percent said Yes, and 5 percent didn’t know, out of nearly 800 total votes over three days.

On May 11th Gov. Jerry Brown released a revised, $124 billion budget with more spending than he proposed in January but nothing for the category of Career Technical Education (CTE). Our interview with Assemblymember Frank Bigelow regarding the funding cut is in our news story “Bigelow Says More Support Still Needed To Save K-12 Tech Ed Funding” is here.

The budget proposal will impact more than FFA programs and Agriculture Education, also affected will be in-class instruction for areas such as Business and Marketing including Future Business Leaders of America, Health Careers Education, Home Economics and Work Experience Education as well as programs aimed to prepare and develop CTE instructors.

The Governor describes the current Local Control Funding Formula as a way to reinvest and “correct historical inequities in school district funding with $1.4 billion in new funding.” The formula focuses most new funding to districts with low-income students, English Learners, and students in foster care and eliminates the deferral of funding that was included in the January Budget.