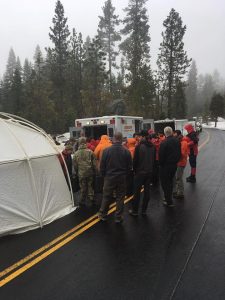 Tuolumne County, CA — The search enters day three for a man who took a trip to his Tuolumne County cabin last week and has not been heard from since.

As earlier reported here, 67-year-old Charles Duston was reported missing by his wife when he failed to return from his trip Monday.  Rescue crews made it to his cabin Monday, which is about six to seven miles off Highway 108. There was no sign of him but it was clear he had been there, according to Tuolumne County Sheriff’s Officials, who say on Tuesday a CHP H24 helicopter was brought in to help with the search.

Sheriff’s officials update that Duston’s snowmobile was discovered Tuesday nearly two miles from his cabin.  Rescuers also found snowshoe tracks leading away from the sled, which teams are following along with plans to comb the Eagle Creek area on Wednesday. Unfortunately, the cloudy weather has forced the suspension of the helicopter.  Sheriff’s officials indicate that the search area is about three square miles in “very challenging” terrain.