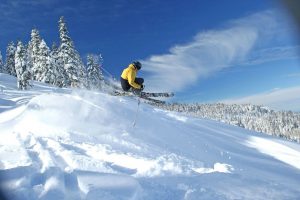 Sonora, CA – While still too early for the number crunchers to report the Mother Lode’s resorts are sharing anecdotal notes about this year’s ski season.

As Bear Valley Resort prepares to host its final weekend, over at Dodge Ridge, the mountain crews are enjoying a well-deserved breather, having put the wraps on the 2016-17 ski season last weekend in order to go out on a high note. As spokesperson Jeff Hauff explains, officials were anticipating that this weekend’s warm weather would rapidly diminish ski conditions.

Describing the season as tremendous, Hauff shares, “We picked up about 40 feet [of snow] this season. We had about 481 inches – and were open for 112 days. January alone brought about 20 feet and then February followed up with about another ten feet of snowfall.” Normally, he says, an average season would bring about 350 inches of white stuff. Hauff adds that the season prior, which started a bit earlier than normal — over Thanksgiving Weekend — was also a good one for snow, especially coming in the wake of a severe drought. Dodge Ridge relies on Mother Nature and does not do any snow-making of its own.

Enjoying The Post-drought Bounce Back

Asked about the resort’s comeback from those years, Hauff shrugs. “As soon as the snow falls people are here — it is not much of a stretch to get things going again, and we are always prepared with staff for the snowfall,” he maintains. “As soon as this year’s snow started coming in droves once again, it was just on — and we moved ahead like we have always done for decades now. We are in our 67th year, and well attuned to the fluctuations in snowfall.”

Over at Bear Valley, which gets its seasonal snow-making operations underway early each November, spokesperson Rosie Sundell points out that even during the drought years, the facility was able to maintain its 120-day ski season each year. “Of course, natural snow provides more mounds and is much less expensive [than snow-making],” she says. Last season Bear Valley had 300 inches of snow. “The reality is that 300 to 350 inches of snow on the right days is fantastic,” Sundell explains. “What hurts us is snow on the wrong days — and I am talking about your Saturdays, your holidays — so last year was honestly one of the best seasons we had in many years, because it snowed midweek and was sunny on weekends or on holidays.”

This year, she says, “While we had more snow – almost 200 inches more than last year – some of it was really challenging and we had to close for a few days — I want to say nine [days]…and so our January and February, with a few days of closures, were challenging. But March and April were awesome, so [the season] was slightly better than last year, and we are excited to see the final numbers since we are staying open an extra week.”

Persevering, Cheering Through The Challenges

During the drought years, Sundell recalls seeing lots of resorts closing. “In 2014-15 we were one of seven resorts in California still making snow in February — it was unprecedented. We did not have anything to gauge whether this was the wrong or right thing to do, but we knew we had our pass holders who had already committed their dollars to us — and we needed to provide a product.” While the resort was able to stop making snow soon after that rough spell and finish off season in April, she notes, “January-February snow-making sessions are outside of plan, so we hope to not have that anymore!”

Like Dodge Ridge, Bear Valley considers itself a regional resort, attracting second-home and local skiers as well as day-trippers from the San Francisco and Monterey bay areas and nearby valley communities. Far from feeling competition, Sundell comments, “We are actually really happy when everyone else is open — because it creates excitement for the California population to go skiing. If it is too sunny out, it doesn’t matter that we are open — Californians have too much to do and they are [then] going to go to the beach..or golfing. So it is really helpful when all the resorts are firing on all cylinders…so we always hope that Mother Nature does her thing — and this year has been really great.”

Looking ahead, Sundell alludes to plans by Skyline, Bear Valley’s parent company, to make some new capital investments, cracking, “I’m dying to tell you but I will have to hold it for the moment.” Already preparing to launch a number of new summer recreation offerings in tandem with the local Forest Service, Sundell also teases that, once those plans are approved, “Folks will have opportunities to spend time at 8,000 feet, having a lot of fun and seeing the forest in some really great ways.”

(Click on the image box for slideshow photos of some memorable moments from the ski season.)