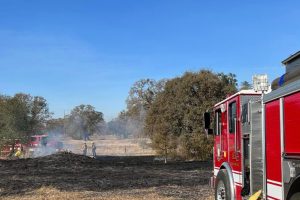 Update at 1:45 p.m.: Fire crews have contained a vegetation fire in the Burson area of Calaveras County. The flames broke out just after 1 p.m. in some grass in the 5900 block of Pettinger Road, between Albert and Amos lanes, south of Highway 12. According to CAL Fire spokesperson Emily Kilgore, crews were able to quickly extinguish the flames upon their arrival at well under an acre. She added that a small crew will remain on the scene mopping up, and what ignited the blaze is under investigation.

Original post at 1:23 p.m.: Burson, CA — Fire crews are heading to a vegetation fire in the Burson area. The flames are reported to be in the 5900 block of Pettinger Road, between Albert and Amos lanes, south of Highway 12. There is no information on the fire’s activity or whether any structures are threatened. An update will be provided as soon as new information comes into the newsroom.