A Burglary Scare For Columbia Homeowners 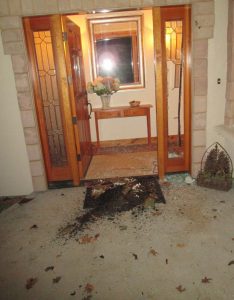 Columbia, CA – A Columbia couple got quite a fright on Friday morning as a thief broke into their home as they were getting ready for work.

The break-in happened just after five in the morning when the Tuolumne County Sheriff’s Office was alerted to a burglary in progress on the 22000 block of Sawmill Flat Road in Columbia. The scared homeowners had locked themselves into their bedroom and while talking to dispatch reported someone was trying to get into the room.

When deputies arrived on the scene, they discovered glass on the ground as the front door window and side light were broken out. The door was also ajar.  Once inside the home they found 19-year-old Tyler Vanmeter of Farmington inside and ordered him to the ground. During questioning he told the deputies he and his friend had been watching the home for a while.  He stated he broke in “to prove to his friend that he was tough.”

Sgt. Andrea Benson reports lights and a TV were on when Vanmeter broke into the home.  She adds that no other suspect was found in the home with Vanmeter to corroborate his claims. She states, “We do not know if this friend exists or if that statement was true.”