High Water In Creeks In The Mother Lode 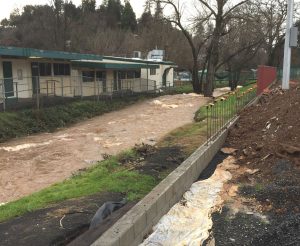 Sonora, CA — Local creeks are full, Dragoon Gulch is partially closed and local reservoir levels continue to rise. How did Sonora High School do through the storm? Maintenance and operations manager Gilbert Hamerbeck says, “Not too bad, we did very good!” Hammerbeck has been at the school since 2AM. Woods Creek got up to the band room sidewalk a little but there were sandbags in place and it did not get high enough to get inside. Hammerbeck says there wasn’t any damage to classrooms, but a few had rain blow in under the door. The biggest leak issue was in the sports announcing booth at the stadium where the carpet is now being dried out.

In other years Sonora High School has been closed due to high water in Woods Creek threatening to go over the bridge and fire lane that connects the campus. Hammerbeck says the river remained two feet below that bridge and credits more cleaning out of the riverbed area noting “I think it really helped a lot this time.” The debris are cleaned out twice per year, the most recent was done by an inmate crew the day after Christmas.

Further down stream, Woods Creek is over the footbridge at Dragoon Gulch. The park remains open but access is only available through Bonanza Road, park access from Alpine Lane is closed. City officials note the area is a muddy mess. Rotary park is open as well, as seen in the photos there is evidence that sometime in the night the water did go over the river’s banks at the park. Other photos from around the area show a mud slide on Parrotts Ferry is being cleaned up and the water is high at the Mother Lode Fairgrounds.

Local rain measurements currently show one inch of rain since midnight as measured at Columbia Airport. As reported on Monday here, New Melones reservoir levels are up and they are up an additional 5% since Monday at midnight to midnight last night. New Melones is now at 33% of capacity and 56% of its historic level. Lake Don Pedro reservoir has risen from 80% of its total storage on Monday to 86% and from 120% of its historic average to 129%.