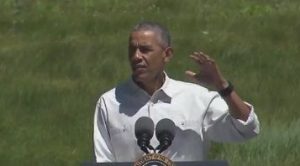 President Obama is preparing to deliver a farewell address and was Monday’s KVML “Newsmaker of the Day”. Here are his words:

“Since the days of George Washington, presidents have delivered some form of final message while in office – a farewell address to the American people.

On Tuesday night, in Chicago, I’ll deliver mine. I chose Chicago not only because it’s my hometown – where I met my wife and we started a family – but also because it’s really where my career in public service began.

The running thread through my career has been the notion that when ordinary people get involved, get engaged, and come together in collective effort, things change for the better.

That’s the belief at the heart of this precious American experiment in self-government. It’s what gives work and purpose to each new generation.

It’s easy to lose sight of that truth in the day-to-day back-and-forth of Washington and our minute-to-minute news cycles. But remember that America is a story told over a longer time horizon, in fits and starts, punctuated at times by hardship, but ultimately written by generations of citizens who’ve somehow worked together, without fanfare, to form a more perfect union.

Over the past eight years, we’ve added our own new chapter to that story.

Together, we’ve turned an economy that was shrinking and losing jobs into one that’s growing and creating jobs, with poverty falling, incomes rising, and wages that have jumped faster over the past few years than at any time in the past four decades.

Together, we’ve achieved what eluded politicians of both parties for a century – we’ve moved 20 million more Americans from uninsured to insured, ended the days of discrimination against the up to half of Americans who have a preexisting condition, and secured new rights and protections for everybody with health insurance.

Together, we’ve brought home most of our brave troops from Iraq and Afghanistan, and took bin Laden and thousands of other terrorists off the battlefield for good. We’ve opened a new chapter with the people of Cuba, shut down Iran’s nuclear weapons program without firing a single shot, and brought the world together around a climate agreement that could save this planet for future generations.

By these measures and many more, we have made America a better, stronger place for the generations that follow ours. We’ve run our leg in our long journey of progress, knowing that our work is and will always be unfinished. That’s the imperative of citizenship – the idea that with hard work, people who love their country can change it. That will be the focus of my farewell to you this Tuesday – and I hope you’ll tune in. Thanks.”