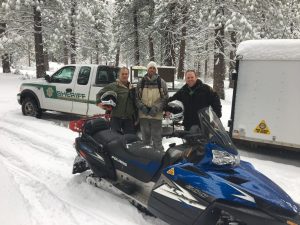 Calaveras County, CA — A San Francisco man was rescued after getting lost while hiking near Camp Connell.

The Calaveras County Sheriff’s Office received a call on Tuesday morning from Eric Vanwambeke who had ventured out into the snow. The call was brief and subsequent efforts to call him back were unsuccessful. The Sheriff’s Office was able to pinpoint the callers approximate location by using cell tower information. Vanwambeke was believed to be about three miles northwest of Highway 4 on a road that was covered by snow. The Search and Rescue Team responded and used snowmobiles to head out towards the location. Approximately five hours after the 911 call was placed, Vanwambeke was located in good health. He had gone out hiking the day prior and became disoriented due to the weather. He had adequate clothing for the conditions and food and water. His cell phone quit working, however, shortly after placing the 911 call.

The search consisted of four Calaveras Sheriff’s Deputies, two deputies from Alpine County and 10 volunteers with the Calaveras County Search and Rescue Team.