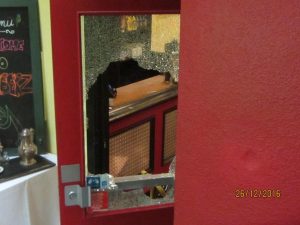 Sonora, CA — In the days surrounding Christmas there were unfortunately several thefts and burglaries.

He says one of the most notable incidents was Christmas morning at the Sierra Village Apartments on Greenley Road in Sonora. Seven vehicles were broken into and two of which were stolen. Those taken, a 1996 Subaru Legacy and 2002 Kia Sportage, were located later in the day. The Subaru was pulled over in Jamestown and was being driven by 18-year-old Dakota Smiley of Copperopolis. The suspect was arrested and booked into Tuolumne County Jail. The Kia was located along Jamestown Road in Sonora unoccupied. Smiley’s alleged accomplice, Jesse Newton of Tuolumne, is being sought by the Sonora PD. Anyone with information on his whereabouts should call 209-532-8141.

Several other incidents from the holiday weekend remain under investigation. It is unknown at this time if any are connected, and no arrests have been made.

Emberz Restaurant in downtown Sonora was broken into at 4:50am on Christmas morning. Based on surveillance video, a suspect forced his way into the rear of the building through a locked door and then smashed a window to get into the main restaurant area. The suspect stole cash from the register and unsuccessfully attempted to pry open a safe.

In addition, on Thursday, December 23, a detached garage was broken into along Golf Links Drive in Mi Wuk Village. The Tuolumne County Sheriff’s Office reports that $2,750 worth of tools went missing.

On Christmas Day, the Sheriff’s Office adds that Charley’s Books and Galleria on Main Street in Jamestown was burglarized and $200 worth of paper currency was taken.

On December 26 a suspect or suspects forced entry into the rear storage room of the Tuolumne Market. There was an unsuccessful attempt to gain entry into the market via two rear doors.