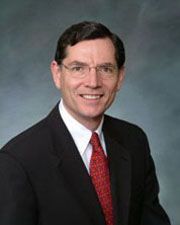 Barrasso was Tuesday’s KVML “Newsmaker of the Day”. Here are his words:

In small towns and big cities across America, families have spent the past several years struggling under the health care law known as Obamacare.

Last month, Americans demanded accountability – and they voted for change. They were tired of living under a costly and complicated health care law that broke one promise after another. In a Gallup poll just this week, 8 out of every 10 Americans favored changing the health care law significantly or replacing it altogether.

The result of the election gives all of us the opportunity to take back control of our health care. Americans can look forward to getting the care that they need, from a doctor they choose at lower cost.

That means health insurance that meets your family’s needs – not what Washington demands that you have. Health care that lets patients and doctors decide what’s best for a family’s health, not government bureaucrats. And health insurance you can afford – because honest competition lowers prices better than government regulations ever can.

No amount of tinkering or taxpayer bailouts is going to make Obamacare work. It needs to be replaced and repealed. Repeal is only the first step – it clears the path for a replacement that costs less and works better than what we have now.

The mandate that people must buy government-approved insurance will be eliminated. More than 20 Obamacare taxes will be repealed. People will have more freedom and flexibility to make their own decisions about their health care. Americans will be able to use Health Savings Accounts for the care that they believe is best for them and their families. It will be easier to buy insurance across state lines.

As a doctor who also served as a Wyoming state legislator, I know that one size does not fit all. States are much better than Washington, D.C. at knowing what works best for their people. That’s why states will get back the power to run their own Medicaid programs.

Over the years since Obamacare was passed, we’ve heard from people every day about how the law has hurt them personally. We’re listening, and we’re keeping our promise. When someone in your family is sick, you should only have to worry about their health – not about health insurance. If we work together, there is a better way.

Now, many Democrats in Congress have already shown that they will refuse to help us find that way. They’ve sworn to defend Obamacare, no matter what it costs you. I hope they’ll reconsider, and work with us for better health care for all Americans.

We’re going to do everything we can to reverse the damage done by Obamacare, and do it as smoothly as possible. It won’t be easy, and it’s going to take some time. But step by step, we’re going to put patients back in charge, bring down the cost for families, and make sure that having health insurance actually means something this time.