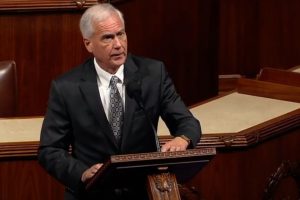 McClintock quoted a speech by President Lincoln during the civil war where Lincoln reached out to Democrats stressing, “We are not enemies, but friends.  We must not be enemies.” McClintock criticized the President for condemning Make America Great Again (MAGA) supporters as “extremists” that “threaten the very foundation of our Republic.”  McClintock ended the letter by stating, “As the person most responsible for the policies we now live with and the future that is unfolding before us, I ask you to engage as a friend and not an enemy.”

Below is McClintock’s entire speech:

We Must Not Be Enemies

“As the tensions of civil war reached a boiling point, President Lincoln vainly reached out to Democrats with these words: “We are not enemies, but friends.  We must not be enemies.”

The contrast with Mr. Biden’s September 1st speech in Philadelphia is jarring.  In it and many remarks since, Mr. Biden clearly addresses the 74 million Americans who voted for Donald Trump as enemies who – quote – “threaten the very foundation of our Republic.”  He condemned us as “extremists” who “do not respect the constitution” who “do not believe in the rule of law,” and who “refuse to accept the results of a free election.”  In other forums, he has called us “semi-fascists.”

Mr. President, we revere our Constitution and the structure of individual liberty it was designed to protect.  We do not understand how a government established under that Constitution could use the FBI to pressure social media platforms to censor and suppress free speech, or to intimidate parents concerned about their school boards with threat tags, or to instruct its field offices to regard anyone who displays our founding American flags as a political extremist.

And Mr. President, of course we accept the results of a free election.  But we do not understand how the safeguards that protect the integrity of our elections can be torn down to benefit one party.  Replacing in-person, election day voting with mail in ballots, ballot harvesting, month long voting, accepting ballots after election day, printing ballots on home computers – all of these changes undermine public confidence in the process that is essential to democracy.

We wonder how you can call MAGA candidates a fundamental threat to our Republic while your party spends millions of dollars to nominate them when you believe it may help you in November.

Mr. President, we condemn all forms of violence – and especially political violence – in the strongest possible terms.  The riot at the capitol on January 6 was a disgrace and an abomination that you are right to condemn and we join you in doing so.  But we don’t understand how you can at the same time turn a blind eye to prosecuting the political violence that burned our cities the year before – or how you can refuse to enforce the laws that protect our Supreme Court justices from intimidation at their homes.

Mr. President, we, too, fear for our democracy.  We fear armed bureaucracies that seem increasingly disconnected from the results of our elections.  We remember that the IRS singled out ordinary Americans because of their political views, yet no one was held accountable and now you are adding 87,000 new agents.  We fear arbitrary changes in our election laws calculated to skew results.  We fear an executive branch that is increasingly taking over the legislative powers of Congress and the judicial powers of our courts.   And we fear the powers of government wielded by officials who view half of our people as dangers, threats and extremists – your words, Mr. President.

Lincoln spoke of the mystic cords of memory tracing back to the founding of our nation that must hold us together as Americans.  As friends and not as enemies.  Yet we see these chords increasingly strained by an alien ideology that seems hostile to the flag, the principles and the heritage of our nation.

As the person most responsible for the policies we now live with and the future that is unfolding before us, I ask you to engage as a friend and not an enemy.

We must not be enemies.”