Mosquito Fire In Sierra Nevada Continues To Grow In Size 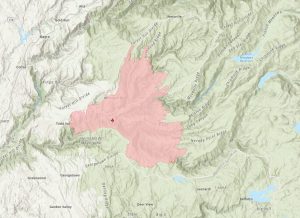 Noting the challenges faced yesterday, CAL Fire reports, “The Mosquito Fire spotted across the Middle Fork of the American River into the Pond Creek Drainage, which is just below the community of Foresthill. Steep terrain and critically dry fuels drove rapid fire growth and an aggressive upslope run towards Foresthill Road. A large contingency of firefighters and additional equipment responded to this southeast corner of the fire to actively defend and hold the fire along contingency lines.”

Overnight, firefighters successfully held the fire along the southern edge of Foresthill and Todd Valley. Today’s top priority will be strengthening and securing containment lines in that area.

64 structures have been destroyed by the fire and 11,277 people remain evacuated. The cause of the blaze, which ignited on September 6 near Oxbox Reservoir, remains under investigation. Drift smoke continues to be visible across the Mother Lode.