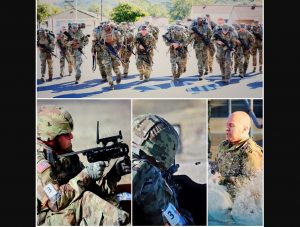 San Andreas, CA — The California National Guard puts on a competition for the top one percent of enlistees and non-commissioned officers to square off in the ultimate physical and mental test, to find out who is the “best of the best.”

Calaveras Sheriff’s Deputy Kyle Johnson was one of only seven to qualify to compete in the Non-Commissioned Officers division, ultimately earning second place in the 2022 Best Warrior Competition for the State of California.

The event included a written test, obstacle course, drills, water survival, in-ranks inspection and land navigation.  Competitors were also required to pace themselves in an unknown distance run. This year, a mystery event was added—where each competitor shot targets and then had to drag a 180-pound training prop uphill.

There was also an earlier four-day event just to qualify for the competition.

The Calaveras County Sheriff’s Office reports, “We at the Calaveras County Sheriff’s Office are incredibly proud of Deputy Johnson’s accomplishment.  We support and are grateful to have the opportunity to employ dedicated members of our armed services.  In addition to Deputy Johnson, we have several other deputies who have served or are still serving in the armed forces.”