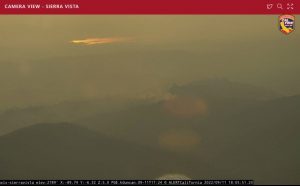 Update at 6:20 pm: Firefighters have stopped the forward spread of the vegetation fire that ignited during the five o’clock hour at the intersection of Hawver Road and Gold Strike Road in San Andreas. No structures were damaged and the cause remains under investigation. It was initially reported as possibly two fires that merged into one. Mop-up will continue this evening so be prepared for activity in the area.

Original story posted at 6:10 pm: San Andreas, CA — Officials are on the scene of a vegetation fire at the intersection of Gold Strike and Hawver Road in San Andreas.

The fire is at least 10 acres in size. The incident was initially reported as possibly two fires that merged into one. Air and ground resources are working to build a control line. We’ll pass along more information as it becomes available.