Update: Fire On HWY 108 Near Soulsbyville 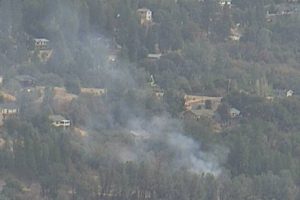 Fire on HWY 108 near the Soulsbyville Road intersection

Update at 5:55 p.m.: CAL Fire reports that the Highway 108 westbound lane shoulder fire has been contained at a 50′ by 50′ spot. The roadway is reopened to traffic. What ignited the fire is under investigation.

Original post at 5:30 p.m.: Soulsbyville, CA — Resources including Columbia aircraft and ground crews are battling a vegetation fire burning along the westbound lanes of Highway 108 near the Soulsbyville Road intersection. The flames are in the shoulder, according to CAL Fire, and no structures are threatened at this time. There is no size estimate for the fire, but the flames are reportedly spreading at a moderate rate.

The near side of the westbound lanes has been closed, and officers are directing one-lane traffic. An update will be provided as soon as new information comes into the news center.