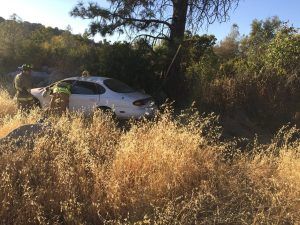 Tuolumne County, CA — A Sonora man was injured after leading CHP officers on a high speed chase at around 5:30pm on Sunday.

It occurred in the area of Parrotts Ferry Road. The CHP attempted to pull over a white Ford Taurus driven by 23-year-old Robert Kendale Smits, but he instead accelerated and reached speeds up to 80 miles per hour. The car eventually went off the road, hit a large boulder, and went airborne. Smits was ejected, and the car hit some PGE wires. It caused over 700 homes in the area to lose power. Smits suffered major injuries in the crash and was flown to a hospital in Modesto for treatment. A passenger in the vehicle was not injured.