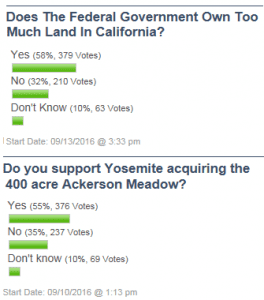 Two informal three day polls on MyMotherLode that each received over 650 votes, reveal differing opinions about Federally owned land in California. The most recent poll asked “Does The Federal Government Own Too Much Land In California?” Over half, 58 percent voted Yes while 32 percent voted No.

Local Congressman Tom McClintock stated here the federal government owns 48 percent of the land in California.  In Tuolumne and in the Mother Lode there are examples of each of the four ways land is managed by four different federal groups.

The Bureau of Land Management (BLM) manages Red Hills Area of Critical Environmental Concern near Chinese Camp which is 7,100 acres. The Bureau’s Mother Lode Field Office, in El Dorado Hills, is directly responsible for approximately 230,000 acres of Public Land scattered throughout fourteen Central California counties. The BLM was established in the Federal Land Policy and Management Act of 1976.

The Bureau of Reclamation manages New Melones and various water resources including 53 hydroelectric powerplants in the United States, 48 of them in California. It was established in 1902 to promote the economic development of the West by constructing dams, powerplants and canals.

The National Parks Service (NPS) has managed Yosemite since it was created in 1916 but some land in the Yosemite was set aside for preservation as early as 1964. According the the NPS website its system includes 413 areas covering more than 84 million acres in every state, the District of Columbia, American Samoa, Guam, Puerto Rico, and the Virgin Islands. These areas include national parks, monuments, battlefields, military parks, historical parks, historic sites, lakeshores, seashores, recreation areas, scenic rivers and trails, and the White House.  President Obama’s recent designation of the Northeast Canyons and Seamounts Marine National Monument marks the 27th time, according to the Associated Press, that Obama has used the NPS’s Antiquities Act of 1906 which allows Presidents to create or expand national monuments.

The other poll question posted before the one about Federal land ownership was “Do you support Yosemite acquiring the 400 acre Ackerson Meadow?” The results were over half, 55 percent, Yes and 35 percent No.