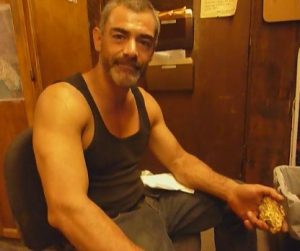 Jamestown, CA — Up for a goldrush this holiday weekend? Heads up.

A local Jamestown prospector is sparking excitement sharing that, after he moved a boulder in Woods Creek he made a find of a lifetime — a gold nugget over a pound in size — wedged in a muddy crack within the bedrock.

Oscar Espinoza admits he is still recovering from the shock and can’t remember exactly when this past week he first located the stunning treasure under the rock. He thinks his largest find previous to this momentous event may have been a nugget just under a quarter-ounce.

Feeling The Weight In A Dreamlike State

Espinoza recalls, “I knew exactly what I was looking at, especially right when I picked it up – the weight of it — you just can’t mistake — so I put it in my back pocket right away and I was just wondering when I was going to wake up! I thought I was dreaming.” Still marveling he continues. “After a while I got ballsy and pulled it out of my pocket…analyzed it a little closer and, sure enough! It was a great achievement.”

Gold Prospecting Adventures, LLC, for which the lucky prospector works part-time, estimates the nugget as being worth somewhere between $30,000 and $70,000, due to its value as a historic specimen. Espinoza says plans to wait a few weeks while studying up on the most viable ways to advertise his find in order to get the best price possible. Already he has earmarked some of the proceeds for getting formal schooling in animal training, a passion of his.

Far from resting on his laurels, Espinoza plans to keep on prospecting. “Woods Creek is a good place to focus on. It is known to be one of the richest creeks in Tuolumne County,” he remarks. “If any prospectors move things…moving big boulders in the current is what exposed [the nugget]…there are cracks that haven’t been cleaned out…rocks that may not have been moved before. Sometimes it is hard but it can pay off pretty well,” he says with a genuine humbleness, perhaps barely tinged with a minuscule of altogether understandable swagger.

Adding a supernatural element to what is already a mighty fine yarn, Espinoza shares that, ahead of moving the creek boulder, he visited the grave of his dear friend Dan Hanford, a prospector in Columbia, who passed away recently. “It almost seemed like he drew me to [the nugget] and I pretty much have dedicated this find to him, because everywhere I go I do carry his teachings with me…I miss him a lot…he has helped me out a lot over the years.”

Over at Jamestown Hotel, owner Charlie Morgan recounts he helped Espinoza find a secure place for the nugget. “It is a beautiful piece. It has crystal in it and it’s really cool – and it is nice that it was found here, locally. It has been years since anyone has found anything of that size, I think.”

Morgan speculates that, at the current per-ounce price of gold by its sheer weight the piece would bring about $24,000. “It’s actually worth more the way it is with the quartz in it as a historic piece than if you melted it down and made a gold bar,” he emphasizes. Chuckling he offers, “What’s Michael Jackson’s hat worth? It depends on who wants it.”

Already sensing a bit of gold fever in the air, Morgan recounts hearing perhaps the last time any such excitement kicked up years ago may have been when the Jamestown streets were being dug up to put in sewer lines. “The father of the guys who are running the gold place sprinkled some gold in that dirt and created a whole frenzy,” he laughs. Although Morgan was not around at the time, he was told that guards had to be hired to keep the dirt from being stolen off the street.

Far from discouraging a ruckus from wannabe prospectors in Jamestown, Morgan says with a wink, “It’s okay as long as they stay here – and they have to eat, too.”

Perhaps the times just ahead may become more colorful yet — and not just tinged with gold. Morgan confirms there is a Bigfoot hunter in town right now. “Indeed,” he agrees. Just now, Jimtown seems to be getting more interesting by the moment.