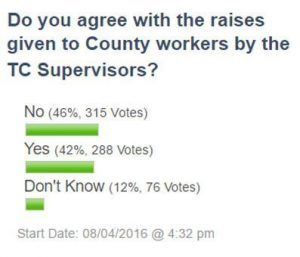 As reported on August 2nd, the Tuolumne County Supervisors voted to approve pay increases for many county employees and elected officials. On August 4th an informal MyMotherLode poll question asked “Do you agree with the raises given to County workers by the TC Supervisors?”

The results of the poll, posted for 3.5 days, were 46 percent of the 679 votes disagree with the raises, 42 percent agree and 12 percent didn’t know. The raise includes a 2% across the board cost of living adjustment for most employees. Pay will also increase for several positions based on a study performed by the firm Koff & Associates in 2015 on how the salaries for various positions compare with similar type out of county areas. It brings positions that were 20% or more out-of-market down to 19%. The Supervisors, who did not receive a raise, noted that rank-and-file county employees, and elected officials, had made sacrifices during the recent recession and this is a step towards restoring pay to more desirable levels.

Examples of pay rate changes and initial proposals for increasing the Supervisor’s pay are detailed in the news story “Many County Employees Will Receive Pay Raise” here.