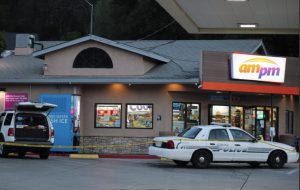 Update at 9:15am: Sonora Police Chief Turu VanderWiel is providing additional information about this morning’s armed robbery at the AM-PM Express Mart. In response to questions about how many suspects, and the type of weapon used, he relays, “Two subjects entered the business, both presented firearms, and their faces were concealed.”

He says the PD is still reviewing surveillance data and should have more information to share (descriptions, etc.) later.

Earlier details can be found below:

Original story posted at 8:43am: Sonora, CA  — Sonora Police Chief Turu VanderWiel reports that officers are investigating an armed robbery that happened at around 4am at the AM-PM Express Mart on Pesce Way.

He says in a statement, “Two armed suspects entered the business and stole an undisclosed amount of cash. They fled the area before officers arrived on scene. Nobody was physically harmed during the incident, and we are still processing the scene.”

Anyone with information that could help in the investigation should call the Sonora Police Department at 209-532-8141. No additional information has immediately been released. We’ll pass along more details as they become available.