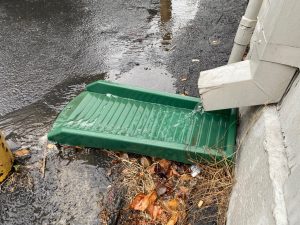 Rain falling in Sonora this morning 8-5-22

Update at 5:55 p.m.: While it seemed heavy at times, the rain showers did not amount to much in the Mother Lode. Clarke Broadcasting reached out to the National Weather Service in Sacramento to get the total rainfall. They reported that in Calaveras County near New Melones Lake, about 2/10 of an inch of rain fell. In the Sonora area of Tuolumne County, between 1/10 of an inch and a quarter inch were recorded. Also, Tuolumne Utility District spokesperson Emily Long detailed that the rain gauge at the Waste Water Plant along Highway 108 recorded 0.12 inches and 0.10 inches at the TUD headquarters on Nugget Boulevard off Tuolumne Road for this morning’s rainfall. However, the minimal amount brought no complaints as any rainfall is much-needed with California being in the third year of a drought. Details regarding the traffic hazards can be found below.

Update at 10:47am and below written by BJ Hansen: Caltrans reports that the mudslide on Highway 4 Ebbetts Pass has been cleared, and traffic is now moving freely.

Original story posted at 7:08am: Sonora, CA — Rain showers have been occurring in the Sierra Nevada this week, and in parts of the Mother Lode on this Friday morning.

While the rain is very welcome related to the ongoing drought, It has resulted in some high country traffic hazards. We reported yesterday that flash flooding caused extensive damage to Highway 89 near Markleeville, resulting in a full closure of the highway.

Caltrans also reports that a rock/mud slide has closed Highway 4 Ebbetts Pass between Lake Alpine and Raymond Meadow. No detour is available and it is unknown when Highway 4 will reopen.