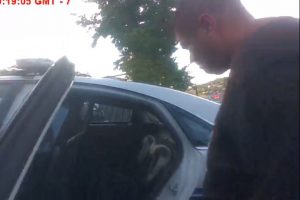 Sonora, CA – The overnight burglary at a Sonora business was all caught on security footage and the alleged thief got away with the goods, but not for long.

On Tuesday morning, a burglary was reported to the Sonora Police Department for a business in the 1000 block of Mono Way. Luckily, video surveillance had captured the suspect stealing cash and electronics from the business. Later that day, an officer saw a man that fit the suspect’s description on South Washington Street in downtown Sonora and contacted him.

The man was identified as 42-year-old Joshua Robert Swiderski of Modesto. Police say he admitted to the theft after he was found with items from the burglary. Also discovered on him were suspected methamphetamine and pepper spray, which Swiderski, as a convicted felon, is not allowed to have.