Parking In A Fire Lane Led To Two Arrests 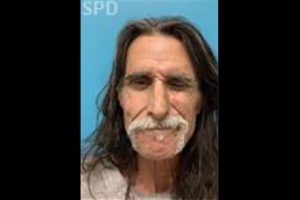 Sonora, CA – After reports of a pickup illegally parking in a fire lane and suspicious activity around the truck, Sonora Police responded, and what they found on the occupants resulted in their arrest.

Last night, just before 11 p.m., officers responded to the Sonora Terrace Apartments in the 200 block of Greenley Road to investigate. Once on scene, they questioned the two occupants of the truck, 65-year-old Michael Snow of Sonora and 32-year-old Jonathan Michael Layton of Riverbank.

Snow was found to have a loaded handgun in his pocket. It is unlawful to carry a loaded firearm in public in California without a permit, which he did not have. Also, due to being a convicted felon, he is not permitted to own or possess a firearm. Layton was on probation for burglary out of Stanislaus County. A pat-down of him revealed heroin and drug paraphernalia. Both suspects were taken into custody without incident.