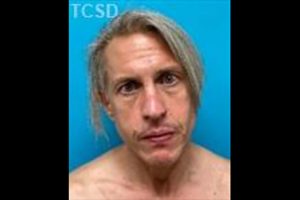 Twain Harte, CA — A Twain Harte man is accused of breaking into a home and then “performing sexual acts in front of a teenage girl,” according to Tuolumne Sheriff’s officials.

The victim’s family called dispatch just after 6 a.m. on Monday to report that they had captured a suspect that broke into their Pine Lake Drive home, south of Highway 108 in the Sugarpine area. Sheriff’s spokesperson Jacob Ostoich tells Clarke Broadcasting that 49-year-old Brian Christopher Jaruszewski entered the home and went into a 16-year-old girl’s bedroom while she was sleeping. Ostoich detailed, “Jaruszewski took off his clothes and performed a sexual act which woke up the girl. She began screaming, and family members intervened before he could touch the victim.”

Jaruszewski was arrested without incident for felony burglary and indecent exposure. His bail was set at $50,000.