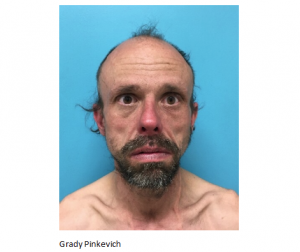 Sonora, CA – A Sonora man is accused of causing about a thousand dollars in damage to the former Tuolumne General Hospital building.

Sonora Police officers were dispatched recently to a report of vandalism to the building located on Hospital Road, off South Washington Street, in Sonora. A caller detailed that it appeared one of the building’s windows had been broken.

Once on scene, the officers contacted a male who was walking away from the area and matched the description provided by the caller. Further investigation determined that 43-year-old Grady Pinkevich was responsible for the vandalism, which police estimated the damage would be about $1,000 to repair. Pinkevich was arrested without incident and charged with felony vandalism.

Of note, in January, Pinkevich was arrested for starting a fire with a gas can and a handheld propane tank in an unoccupied building at the intersection of South Stewart Street and Church Street, as detailed here.